I wish everybody a wonderful new year.

I found some pictures I should have kept secret that Peter took a little while ago. I don’t think we will ever use any of the pictures from the series for anything so I was allowed to put up a few of the candids.

Myself and a bunch of other people also recently worked for Focal Point. We filmed an interesting little number which will come out hopefully sooner then later. 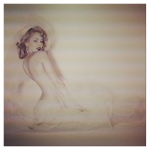 You are currently viewing the archives for January, 2014 at Nicole Melrose.